The inclusion of fluorine, which is the most electronegative element and one of the most difficult to polarise (hence its use in "non-stick" polymers) results in some interesting structural features. These include the aggregation of fluorinated fragments, to give a so-called fluorous domain, whilst the electronic withdrawing effect of fluorine distorts the electronic distribution in other parts of a molecule which can lead to effects such as halogen bonding.

Halogen-bonding is an analogue of hydrogen-bonding. In hydrogen bonding there is an interaction between a hydrogen attached to an electronegative atom and another atom with a lone pair of electrons. Probably the best know example is the hydrogen bonds that hold water molecules together to give ice. [For a similar reason HF is a liquid and has a boiling point near room temperature, while HCl, HBr etc are gases.] In halogen bonding the presence of a number of fluorine atoms reduces the electron density on another halogen, usually iodine, but also bromine (see below), so that it will interact with an atom possssing a lone pair of electrons.

We have investigated a number of such adducts formed from a bromo- or iodo-fluorocarbon and a Lewis base, such as an amine. The picture below shows the structure of one such halogen bonded adduct between 1,2-dibromo-tetrafluoroethane and DABCO (1,4-diazabicyclo[2.2.2]octane). The Crystal structure shows a short distance between the N and Br atoms, and this occurs at both ends of the molecule to form an infinite one dimensional (1D) polymer. [1] 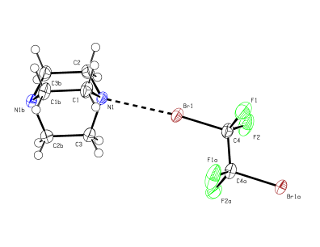 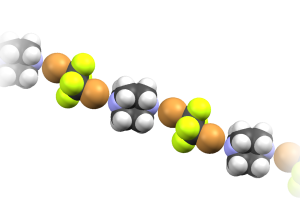 We have used this systematic variation in properties to probe other effects, for example a series of gold(I) complexes were prepared with aromatic, fluoroaryl (C6F5), fluoroalkyl (CF3, C3F7, C4F9) and fluoroalkenyl-containing ligands to see which factors most influenced the existence, or otherwise, of gold-gold (aurophilic) interactions and fluorous domains. In most cases the extended structures did not show any significant Au-Au interactions, instead pi-stacking, hydrogen bonding, or even F...F interactions were favoured.The X-ray derived structures of three of the complexes in this study is shown above. Simply changing one of the three groups on the phosphine ligand results in quite a large change in the crystal packing. This work has been cited in one of the most recent books on fluorous chemistry (Fluorous Chemistry, ed. Istvan Hovath).

Top 25!
Our review of fluoroalkenyl, fluoroalkynyl and fluoroalkyl phosphines was in the SciVerse JFC top 25 Hottest Articles.
read more ...

Modern Computing
Without fluorine containing compounds such as NF3 and WF6 we wouldn't have todays semiconductors!

Selectfluor
The world's most famous electrophillic (F+) fluorinating agent SelectfluorTM was invented in Manchester at UMIST by Professor Eric Banks.