CFCs (chlorofluorocarbons), or their bromine-containing analogues, BFCs, used to be common starting materials for the introduction of organofluorine groups into molecules or metal complexes, but these have been phased out because of the damage that they did to the ozone layer because of the presence of C-Br and C-Cl bonds in these otherwise stable and volatile compounds. Our research uses CFC-replacements as alternatives for synthetic work and as transfer agents.

Most organometallic complexes contain hydrocarbon fragments, we seek to prepare, characterise and ultimately use, complexes which contain organofluorine moieties. Our work in the area started with the synthesis of the fluoroorganometallic lithium reagent perfluorovinyllithium, (CF2=CFLi) derived from HFC-134a (CF3CH2F).This is then used by us (and now many others use our methodology as well) as a route to a wide range of fluoroalkenyl organometallic complexes. One of these, bis(perfluorovinyl)mercury, Hg(CF=CF2)2, shown below, had the distinction of being the first metal-perfluorovinyl compound ever to be fully structurally characterised. In this case we were able to obtain the single crystal X-ray and the gas phase electron diffraction structures.[1]Since then we have studied many more such complexes, of a wide variety of different main-group and transition-metals, such as [(C5H5)Fe(C5H4Hg(CF=CF2)] which shows an unusual pi-interaction.[2]

Related work showed that the chlorinated analogue CF3CH2Cl can be used to prepare 1-chloro-2,2-difluorovinyl complexes, such as the organometallic iron half-sandwich complex shown above.[3]We were able to prepare the first examples of early-transition-metal complexes of these ligands, and ultimately to get the first crystal structure of such a complex, and evidence for a pi-bound intermediate system.

For all of these systems we are able to carry out stereospecific transformations of the fluorovinyl-group to generate trans-(CF=CFR) functions where R=H,Bu,Ph etc etc.[4]

We subsequently demonstrated that other CFC-replacements may be used in a similar way. For example, hydrofluorocarbon (HFC-245fa) (CF3CHFCH2F) is capable of generating trifluoropropynyl lithium (CF3C≡CLi) under facile conditions - this route is now a method of choice for chemists.[5]

Once prepared and fully characterised we investigate the chemistry and applications of the organofluorine containing organometallic systems. For example one of the more unusual transformations that we have discovered is how we can transform a metal-bound CF3-alkyne into a difluorocyclopropene group in one single-pot reaction that relies on steric control rather than the use of toxic heavy-metal, difluorocarbene sources.[6]Addition of a bulky base, such as t-BuLi results in close proximity of the Li and an F from the CF3 group which results in the thermodynamically favourable elimination of LiF and formation of the bound difluorocyclopropene system. 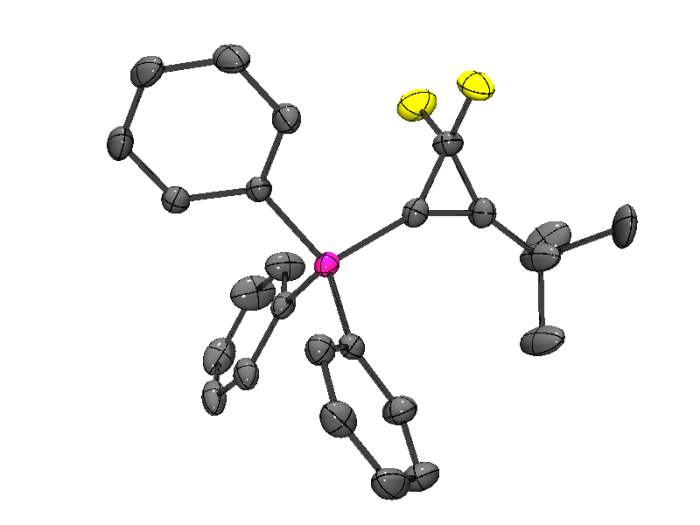 HFCs for biological transformations
Jason Micklefield's group pioneered the use of HFCs as solvents for enzymatic reactions.

Modern Computing
Without fluorine containing compounds such as NF3 and WF6 we wouldn't have todays semiconductors!