Phosphines are one of the most widely studied class of ligands in inorganic chemistry, in part because of the wide range of different applications such phosphines can be put to, ranging from well-controlled ligands, catalysis, phase- transfer reagents through to fire retardants.

Part of this utility comes from the ease with which their steric (size) and electronic properties may be modified. Most traditional, hydrocarbon-based, phosphines have a wide range of steric properties, but a rather limited range of electronic properties. It is more difficult to generate phosphines which are both bulky and weak donors - this is where the introduction of fluorinated groups helps!

We have concentrated on making new organofluorine-containing phosphorus(III) systems because such ligands show a unique combination of steric and electronic properties, often along with enhanced thermal and oxidative stability.

We have devised, and recently published, [1] a generic method for introducing fluoroalkyl ligands into phosphines, to give compounds such as Ph2P(i-C3F7), shown below, which was the first published crystal structure of a phosphine containing a secondary fluoroalkyl group.

The crystal structure of Ph2P(i-C3F7)

Our published method, which involves the reaction of perfluoroalkyl iodides, RfI, with trimethylsilyl-phosphines, such as R2P(SiMe3), allows for the simple preparation of phosphines containing primary, secondary (iso-C3F7, sec-C4F9, perfluorocyclohexyl) and tertiary fluoroalkyl groups, such as tert-C4F9.

We have also prepared a large number of derivatives of these fluoroalkyl phosphines, including metal complexes, such as [PtCl2{PPh2(i-C3F7))}2], [Mo(CO)5{PPh2(i-C3F7)}] (and many others) as well as main-group derivatives, such as the phosphine selenide with a long fluorous chain, shown above. Via these compounds we can determine the steric and electronic properties of the ligands themselves and their implications in particular applications. We have recently published an extensive review in this area of chemistry.[2]

The simplest of the fluoroalkenyl ligands is (-CF=CF2), containing the trifluorovinyl (or perfluorovinyl) group. These can be introduced into phosphines using the hydrofluorocarbon CF3CH2F (HFC-134). Just a few typical examples are: PR2(CF=CF2), PR2(CCl=CF2), [3], [4] PR2(CF=CFH), PR(CCCF3)2 etc. The structure of one complex containing one of these type of ligands, [cis-{(CF2=CF)P(C6H5)2}2PtCl2], is shown below.[5] We undertake this coordination chemistry in order to study the electronic properties of these ligands. We can modify the amount of fluorine in the ligand, as well as the identity of R-groups in this way we can carefully "tune" the steric and electronic properties of the ligand. But typically, these lie between those of traditional tertiary phosphines (PR3) and phosphites [P(OR)3]. More importantly, the ligands are much more stable towards oxidation and decomposition, and throw up their own peculiarities. For example, shown below is one of only two examples of a metal complex that naturally crystalises as a mixture of cis- and trans-isomers (and the other one is fluorine containing as well!) 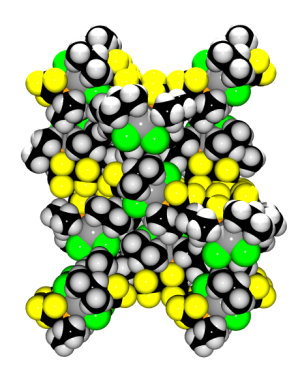 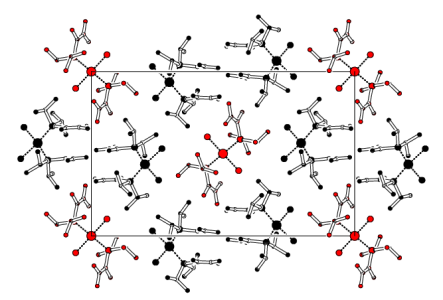 The hydrofluorocarbon CF3CH2CHF2, HFC-245fa, (see also our reactions of HFCs page) provides a simple one-step route to trifluoropropynyl-containing phosphines. [6] The Tfp group is about as electron-withdrawing as the trifluorovinyl group, but much less sterically demanding.

Preparation of trifluoropropynyl-phosphines from HFC-245fa

As described above by modifying the number and type of fluorinated groups attached to the phosphorus centre we can modify the steric and electronic properties of the ligand and hence metal centre.[6]The result of these studies is that phosphines containing ane or more organofluorine group possess electronic properties like those of phosphites, but steric properties closer to large phosphines, they therefore often occupy a unique position on the stereo-electronic map of ligands which is distinct from the more typical examples, see below.

We have used this systematic variation in properties to probe other effects, for example a series of gold(I) complexes were prepared with aromatic, fluoroaryl (C6F5), fluoroalkyl (CF3, C3F7, C4F9) and fluoroalkenyl-containing ligands to see which factors most influenced the existence, or otherwise, of gold-gold (aurophilic) interactions and fluorous domains. In most cases the extended structures did not show any significant Au-Au interactions, instead pi-stacking, hydrogen bonding, or even F...F interactions were favoured.The X-ray derived structures of three of the complexes in this study is shown above. Simply changing one of the three groups on the phosphine ligand results in quite a large change in the crystal packing. This work has been cited in one of the most recent books on fluorous chemistry (Fluorous Chemistry, ed. Istvan Hovath).

With a family of ligands, the steric and electronic properties of which we can modify with relative ease, we have been investigating their use in a number of different catalytic processes, details of which will appear shortly.

We have also developed an on-line phosphorus NMR chemical shift calculator which can calculate the chemical shift position of around 14000 primary, secondary and tertiary phosphines (or phosphanes if you prefer) containing a wide variety of C-H and C-F containing organic groups. You can also see some examples of 31P and 19F NMR spectra of fluorophosphines on our multinuclear nmr page.